The acoustic-optical alarm device SA-K7N is intended for signalling of fire inside buildings.

The signalling device is equipped with housing made of non-combustible material, enclosing electronic components. Upper part of the housing contains light source – power LEDs. SA-K7N signalling devices are equipped with supply connector, WSD switch connector and six-position microswitch located in cover, by means of which operating mode of signallig device can be selected – either “master” or “slave”, and also tone pattern.

The acoustic part of signalling device enables volume adjustment and use of linear volume increase option (from approx. 70 dB up to 100 dB @ 1 m). Adjustment of volume is done by means of potentiometer located in cover of signalling device. While the option of progressive volume increase is switched on by shifting the microswitch to adequate position.

Operating principle of the signalling device:

To close the signalling device: fit together the markers. After that put together the device and turn in the direction marked with an arrow (the sequence in the drawing). On closing, lock the base by screwing in the locking screw.

Radius of coverage area for SA-K7N: 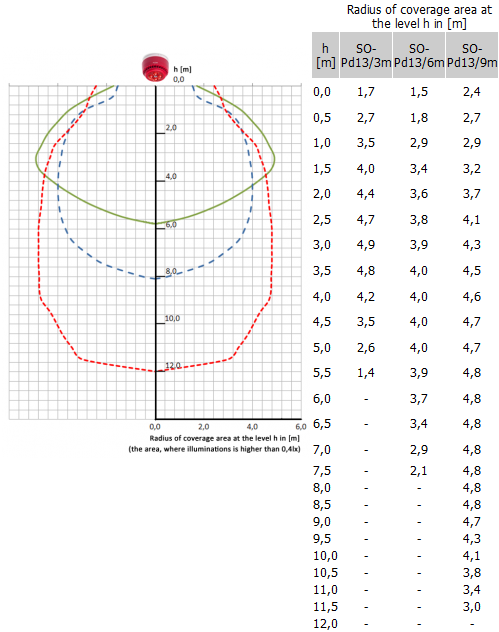 Intended use: The OZ-50-3 covers are intended to protect signalling devices with optical part, detectors or other devices that match…

Use: Mounting Sleeves OM-1 are used to mount the signalling devices manufactured by the W2 company in suspended ceilings, coffered…