The signalling device has a plastic casing that contains electronic components. The casing consists of three parts: a body with a speaker installed, a cover with a printed circuit, and a base that can be mounted on a wall / a ceiling or directly to a PIP-3AN box.
Cover contains:

The power supply connection has three terminals marked as “+1”, “+2”, “GND”. The USB connection makes it possible to copy messages from a PC to the internal memory of the device.

The signalling device can emit up to 18 patterns of acoustic signals; it is also possible to choose the “no acoustic signal” option. Additionally, a flash signal is generated by the optical element during the alarm.

By default, the siren has three messages memorized in its memory and a set fire siren.

When the signalling device has to be deactivated locally (acoustic part), the user can use the attested sound signal switch WSD-1. The signalling device has a connection block for connecting the switch. On connecting the WSD-1 switch, pressing the key deactivates the sound signal of the device (the optical part remains active) . The condition is active as long as voltage is present on the terminals of the device. The active condition of the switched is indicated with the LED on the switch key.

The WSD-1 switch is powered directly from the sounder (it does not require external power supply).

The SGO-Pgw sounder with VAD is available in 4 varieties, which differ in the arrangement of the optical element and the color of the flash generated.

For SGO-PgwA/śb and SGO-PgwB/śb varieties Certificate of Approval is not valid!

To close the signalling device: fit together the markers. After that put together the device and turn in the direction marked with an arrow (the sequence in the drawing). On closing, lock the base by screwing in the locking screw.

Connecting the supply voltage to the terminals triggers the generation of the appropriate alarm and the output signal.

For proper operation of the bus, 120 Ω resistors must be applied at the ends of the bus.
The maximum number of signalling devices operated in one network is 10.
The maximum length of the bus should not exceed 200 m

To work properly, the signaling device requires a configuration file and * .mp3 files with the content of messages. In order to copy files with recordings, disconnect the supply voltage from the device terminals. Then connect the device to the USB port of the PC / laptop with a USB A / micro USB cable (data transmission function required). After connecting the cable, the siren will be visible in the operating system as a mass storage device. Then, copy the files with sound recordings to the siren.

The user should remember to keep the nomenclature of file names with names recognized by the signaling device, i.e. the first message “K1.mp3”, the second message “K2.mp3”, etc.

The next step is to modify the configuration file. In this file, the user selects the siren number as well as the auto-update option. User can choose 1 of 18 siren patterns or no siren.

In case of loss of the configuration file, the file is available for download at www.w2.com.pl after logging in to the MY ACCOUNT.

The diagram for the installation of SGO-Pgw voice sounders with VAD on the ceiling is presented below. The table opposite shows the radius of the coverage area depending on the installation height (h) and the devices type. 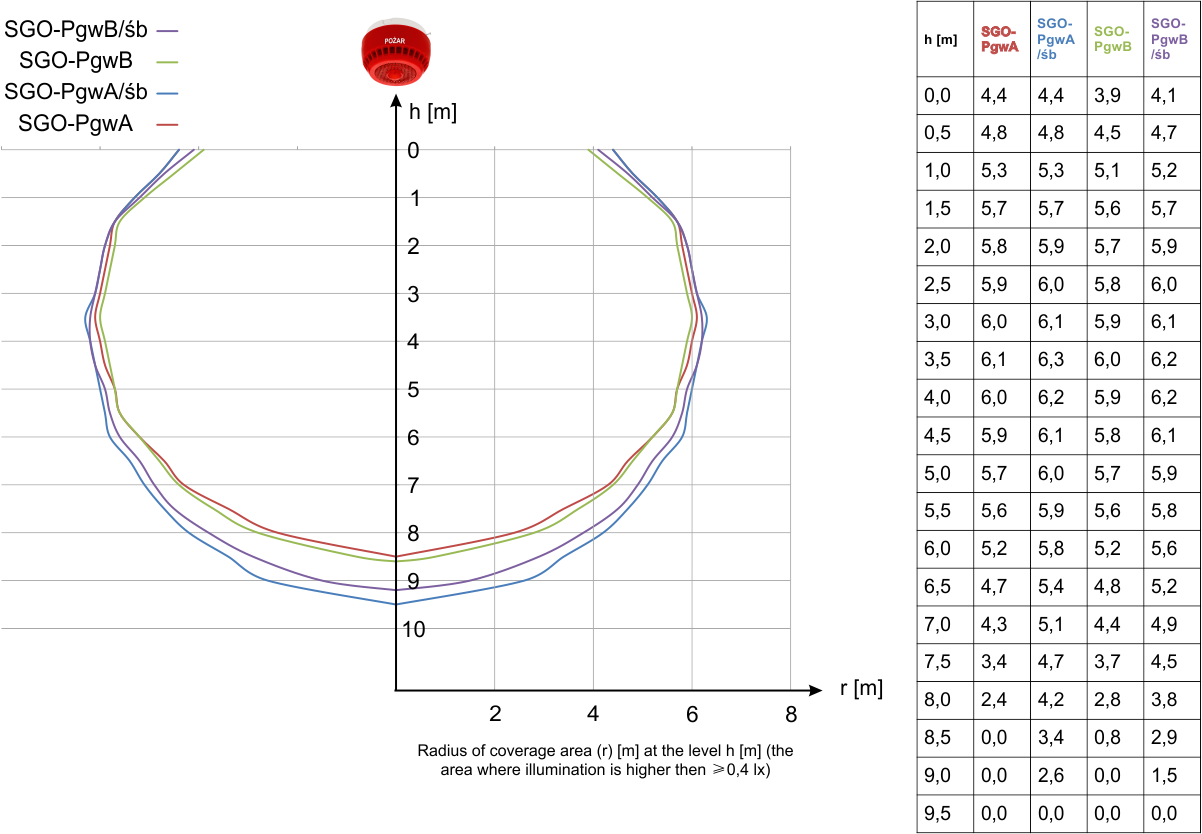 In the figure below, the SGO-PgwA signaling device is mounted on the wall. The approximate cross-section of the photometric solid, where the required illuminance is provided, is presented at a distance (x = 3m) from the signaling unit axis. The coverage area is marked in red.

The cross-sections of SGO-Pgw voice sounders with VAD when mounted on a wall (for a height of 3 m) are presented below. Other cross-sections for other heights are included in the product manual.

Intended use: The OZ-50-3 covers are intended to protect signalling devices with optical part, detectors or other devices that match…

Use: Mounting Sleeves OM-1 are used to mount the signalling devices manufactured by the W2 company in suspended ceilings, coffered…